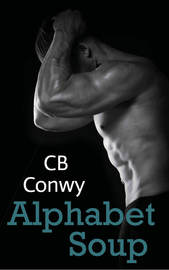 Andy knows exactly what he needs: scenes hard enough to take him out of himself. Then he meets CK, and everything is turned upside down. CK is relaxed and gentle and nothing like what Andy's looking for. Despite that, or maybe because of it, Andy's still attracted to the stranger.

Like the conscientious Dom he is, CK guides Andy's recovery, one scene at a time. Very much against his principles, CK finds himself falling in love with the man he's trying to help. Now he has to fight not only Andy's past, but his own conscience as well.

Excerpt:
"So, did I interrupt your plans for tonight?"

The tour of the club was almost over, and they were back in the big room. Andy cast a quick glance at CK, but there was no innuendo in what he said; he was just making conversation.

"Not really. There were only the usual suspects when I came here; not really what I'm looking for tonight." Andy had no interest in a repeat of last Saturday.

"No? What are you looking for?"

"Someone I can kiss." He had answered before he had a chance to think about it. CK seemed a little taken aback.

"You're looking for someone to make out with? Isn't it a bit hard to find vanilla sex here?"

Andy laughed. "I didn't say I wanted vanilla." He stopped and turned toward CK. "I still want someone to take control, I just don't want to be screaming my head off while I'm chained to a cross tonight. And sometimes you just want to be with someone you can kiss while you get your brains fucked out."

CK blinked. Then he smiled, a slow smile that changed his face completely. Into something very, very hot. Andy found himself transfixed by the look in his eyes, the only thought left that maybe this guy wasn't so far from Andy's type after all.

"You're right, sometimes you do. If you feel like it, I'd be more than willing to kiss you. You did show me around, after all."

Andy forced himself to remember how to talk. "So, you think your skills will be adequate to make up for the entire, uh..." He checked his watch. "...twenty minutes, I've spent on you?"

CK laughed. "They just might be." He got serious, and his eyes narrowed a bit as he inched closer.

Andy swallowed nervously as he was gently pushed backward until his back hit the wall. Then CK slowly took his hands and lifted them over his head, nailing him to the wall. The unhurried, deliberate movements went straight to Andy's dick.

"Was it something like this you had in mind?" CK's gray eyes were fixed on Andy's. Andy had to clear his voice to answer.

"I think it's just about right."

Before Andy could make any more clever comments, CK bent down until his lips were so close to Andy's that Andy could feel the heat emanating from them.

It was scorching hot, and so was CK’s warm breath on Andy’s face, feeling almost like a physical touch. He managed not to move, staring at the dominant man in front of him, desperately wanting the kiss and obediently holding himself still. He could hear his own heartbeat in his ears, the seconds stretching out until he could hardly stand it anymore.

CK tightened the grip around his wrists, and then Andy had to break his stillness and lean forward, finally tasting those warm lips.

"Good boy." CK only pulled back enough to whisper those words and went right back in, letting a moist tongue glide over Andy's lower lip. For a moment, Andy was confused; he had no idea what CK meant. Then his thoughts were lost in the way CK gently probed his mouth, seemingly intent on driving any attempt at coherent thought out of him.

CK succeeded so well that when the man pulled back, Andy forgot about his resolution to hold still, following those lips until the grip around his wrists forced him to break contact. He made a little, frustrated sound, panting as he tried to remember what he was doing. CK smiled again, that slow smile that did something strange to Andy's knees.

"Like that?" CK's voice was low and his eyes intense.

"Good." Suddenly, the intensity in CK's face was gone and the big man gently lowered Andy's arms, letting go of his wrists. CK's hands slid up Andy's arms and massaged his shoulders. Andy blinked, swaying a tiny bit and trying to adjust his balance.

Andy looked at CK without understanding. Of course he was okay; it was only a kiss. He felt a little dazed, though, struggling to find the light mood again.

"I think..." Andy had to clear his voice. "I think that was worth twenty minutes of my time." It wasn't the smoothest attempt at lightening the mood, but CK laughed anyway.