An Accountant into Kink 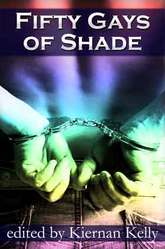 (Please note: This story was originally a part of the anthology Fifty Gays of Shade published by Torquere Press. A new edition will be coming up shortly).

Did you ever wonder what happened to the pushy boy Jeff met in Saturday Night, Life? Well, so did I. It turned out that he's just as pushy, and just as prone to trouble. The good kind of trouble.


"So you're saying that I can't have a fulfilling sex life until I'm twenty-one?"

Hendricks hadn't been paying attention to the guy in front of him, busy trying to find his member's card in whatever pocket it was hiding. Now those words made him look up.

"No, kid. You can have all the fulfilling sex you want. Just not at Shady Business," the bouncer answered in a tone of voice that revealed that this conversation might have been going on for some time before Hendricks arrived at the door to the club.

"But this is the best club in town. Everybody knows that." There was a stubborn note to the boy's voice, and he didn't seem even remotely ready to back down.

"Listen, boy." The bouncer sounded as if he were about to lose his patience. "Do you even know what kind of club this is? You look kind of vanilla, you know."

"I'm not!" It looked as if the boy was this close to stamping his foot on the ground, and that was cute enough for Hendricks to pay more attention to the young man rather than his apparently missing member's card.

The boy was preppy-looking, with a pair of sneakers that probably cost more than some people made in a week, and very neat clothes hugging his slender figure. Hendricks chuckled.

The boy turned toward him with a scowl. "Are you laughing at me?"

"Yes. Because your boyfriend swatting your cute little behind while he fucks you doesn't count, boy. This is a place for hardcore kink." Hendricks patted his front pockets one last time. Still no sign of the damn keycard.

"I know! I have been spanked, by the way, and not by my boyfriend. By someone like you."

Hendricks raised his eyebrows. "Someone like me?" He didn't know he was a type. Accountants into kink were far between in his experience.

"Yeah, you know." The boy's gaze strayed down to Hendricks' leather-clad thighs before they sort of reluctantly made their way up to stubbornly meet Hendricks' eyes again. "Someone who knew what he was doing. He told me that I should play safe, and I checked out everything, and this club is the best there is. That's why I want to play here."

This was the most determined sub Hendricks had ever met. "And now you're ordering Mr. Jameson here to let you in. How's that working for you so far?"