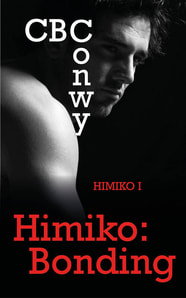 Ever wondered why love stories talk about finding "your better half"? Matt hadn’t, really. Not until humanity got its biggest surprise ever: the arrival of intelligent life from space. The Himika may look reassuringly human, but their unexplained behavior and eerie silence have strained relations between human and alien.

When Matt is "harvested" -- kidnapped -- by the Himika, he's terrified. Nothing makes sense until he wakes up wrapped in Pietr's arms. Pietr may be the most annoying, smug, sarcastic humanoid Matt has ever met. He's also Matt's bonded mate. Plato was right. Everybody really does have a better half, and against everyone's better judgment, it seems Pietr belongs with Matt.

But learning how to communicate the Himiko way (preferably without killing himself or Pietr in the process) is hard, and Matt's mentor, Aki, might be even more aggravating than Pietr. It doesn't help when Matt develops powers that not even the Himika understand. Matt isn't sure he's going to make it -- or if he'll have to let Pietr go in order to keep his mate safe and sane.

Himiko: Bonding is first part of the Himiko story - Himiko: Warrior is second and last part.

Excerpt:
He couldn't wake up. Matt's body was so heavy and he couldn't move his arms or legs at all. It didn't really feel that bad except for the fact that he couldn't move. Couldn't even if he tried really hard. Which he did. He groaned, fighting whatever it was that kept him down, kept his eyelids glued shut.

Nope, he didn't, and Pietr knew it. Pietr. Matt pried open an eye and saw his lover next to him. Satisfied, he managed to roll over. Sighing, he rested against the Himiko, scenting the now familiar body.

Matt felt Pietr's arms around him and then felt the most peculiar sensation he'd ever experienced. It was as if something was poking his brain, but from the inside. He shuffled a bit, trying to make the annoying brain-mosquito go away. Wait. Brain-mosquito. That was funny.

Yeah, you're a funny one. This didn't feel right. It was Pietr, but his lover's voice was all wrong, taking up space in the middle of Matt's brain. Matt shook his head to make it go away, waking up a bit.

I won't hurt you. I promised to get you back, remember? And I'm right here for you.

Matt struggled to sit up, desperately trying to get away from the intrusion in his mind. The feeling of something strange in his head was intolerable.

It's me. I won't hurt you. Please stay with me.

But Matt couldn't, there was no way he could cope with this, with the terrifying feeling of something intruding in his mind. He struggled to get out of the bed, only to collapse against the wall. He curled up and grasped his head, hard.

Please, make this stop. He couldn't take it anymore.

"He's freaking out. If you don't calm him down, we'll have to stun him." The voice was vaguely familiar.

"NO! You can't, I can't lose him again." It was Pietr talking now, and Matt cringed with the desperation in the Himiko's voice. He automatically tried to calm his mate, giving Pietr love and warmth with his mind.

Matt was still choking from the invasion. I can't, it's too much.

But you're already doing it. Far away, Matt registered Pietr holding him, looking into his eyes.

I can't have you in me. It's too much, there's not enough space for us both.

Then come into me. He looked into Pietr's eyes and fell into them. Suddenly it wasn't only his lover inside Matt's mind; Pietr opened up, letting him into his mate's mind, letting him catch his breath again.

Pietr withdrew a little, letting him sense everything there, unhindered. Matt couldn't believe it.

You're so open. There was so much space in here, so many corners and memories and thoughts. And everything was laid bare to Matt with a trust so complete that it baffled him.

I love you. It seemed to be as simple as that for Pietr. And his mate really did; Matt could feel Pietr's love surrounding him. This time it wasn't suffocating. Instead, it was supporting him, letting him know that everything would be all right, that they were going to be together forever. He felt the exhilaration go through Pietr at that thought, and the kiss he got was so full of love and relief that he could do nothing but lose himself in it.

Matt vaguely felt Pietr lifting him back into bed and an annoyingly familiar cough. He pushed Robbie out of the room; really, he had more important things on his mind right now.

He felt Pietr's laughter ripple through his mind. Their minds. He couldn't believe this was true.

Matt spluttered. Mentally, which was a whole new experience. So now "cooperation" is another word for getting off?

If I need words, I'm definitely doing something wrong.


Buy Himiko: Bonding on Amazon
Buy Himiko: Bonding on Smashwords
"A new reality begins within the pages of Himiko: Bonding, an absorbing tale filled with suspenseful drama and passion.  The characters are vivid, memorable, and complex with a heavy dusting of delicious heat on the side.  Original and edgy in all the right places, Himiko: Bonding has quite a few intense moments followed by incredible tenderness.  Himiko: Bonding is a fresh story: suspend disbelief and accept this particular brave new world.  This is one seriously wild ride!"
Joyfully Reviewed
"This is one of the most imaginative sci-fi books I have read in a long time [...] The entire book deals with the exploration of the mental link between Matt and Pietr, and there wasn't a dull moment. The story truly swept me along into a different world, and I loved that. If you don't require spaceships or battles with superior aliens to be part of your sci-fi, this book is for you. Equally, if you've never read sci-fi because you don't like "all that space stuff", this may be a book you enjoy. I certainly did!"
Queer Magazine Online
"Himiko: Bonding is an imaginative, as well as intriguing story that features the development of Matt’s psychic capability. The detailed plot is well-paced, interwoven with humor and sensual lovemaking [...] CB Conwy has created a superbly engaging, as well as, exciting saga."
5 nymphs at Literary Nymphs Reviews
"CB Conwy's story Himiko: Bonding is a fascinating look at what could happen when two completely different races meet for the first time. [...] I look forward to Himiko: Warrior, the next book in the series."
Fallen Angels Reviews