Of Russian Myth and Lore 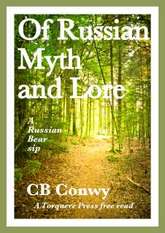 Family. In Mischa's opinion, you can't live with them. Period. That's why he's so reluctant to let Tom meet them, but Mischa's family decides that they'd like to meet Tom. And an order is an order.

This is a once in a lifetime chance for Tom to see a Russian bear in its natural environment. Mischa's family seems friendly enough, at least until Mischa's uncle sends Tom out into the woods by himself. In the middle of the night. However, there's more to Mischa's Russian background than Tom knew. In the quiet summer night, Tom learns a thing or two about Russian myth and lore - and about family.

"Of Russian Myth and Lore" was a part of Torquere Press' Anniversary Sip Blitz in 2011 and is now a free story - read it here. It will soon be available on All Romance as a free story, and I'll try to have it available in Kindle format as well.

Excerpt:
They had been in the car for hours now, the Canadian border far behind them. The landscape surrounding them was beautiful, but Tom was starting to get nervous. He was going to meet Mischa's family for the very first time, and his stomach was filling up with what felt like severely obese butterflies. Moths, perhaps. Overly muscular ones. Gym rat moths.

Tom made an effort and killed the moth metaphor.

The strange thing was that Mischa had never talked much about his family. Yes, most of his relatives lived in Canada, a bit off the beaten path, so Mischa didn't see them that often. And yes, Tom did know the basics; Mischa's mother had died of cancer when he was young, and he had never known his father. Still, it was strange to be this close to someone and not know the people he grew up with.

However, that was going to change. Five weeks ago, in the middle of May, Mischa had gotten a call that had left him grumpy. He’d muttered to himself for almost an entire day before he came into Tom's workroom, the spacious library of the house they shared.

"We're going to Canada in June."

Tom looked up from the paper he was grading. "We are?"

Mischa looked grim. "Yes. No way around it. Sorry." He turned around and left the room.

"What the… Mischa!" Tom got up and stomped after him. "What do you mean, we're going to Canada?"

Mischa stopped and turned around in the hallway, a look of suffering on his face.

"And why the fuck is going to Canada making you sulkier than a toddler who lost his favorite toy?"

"I am not sulking!" Mischa crossed his arms in front of him. Admittedly, he was a bit too macho and Dom-y for the comparison to hold true. But the gesture still made him look surprisingly like a very big, very petulant toddler.

"Yeah, right, you aren't. It's perfectly reasonable that you're walking around staring daggers at the carpet the entire day. Care to tell me what's so horrible about Canada?"

Mischa sighed. It sounded like he had the weight of the entire world on his shoulders. "You're going to meet my family."

"I am?" Tom raised his eyebrows. "Isn't this the time when you normally ask me whether I'd like to meet your family instead of ordering me to do so?"

Mischa sighed again. He really had the geriatric, world-weary thing down pat now. "This is where you're wrong. My family has decided that we go, and therefore we go. There's absolutely nothing either of us can do about it."

"But why would we want to do anything about it? What's wrong with them?" Tom frowned.

Mischa looked patiently at him. "They're Russian, Tom."

"But so are you, Mischa!" Tom was starting to get annoyed.

"But they're very Russian. Very. Russian."

You can read a micro-interview with CB Conwy about the It Gets Better charity sip project here.
"This story made me smile. It is about family, acceptance and how some traditions only make sense once you experience them. It reminded me that, no matter who you become in life, your family always remembers and loves you for who you were long ago – as well as who you have become. If you are lucky."
Queer Magazine Online
"There is much to enjoy in this short, and it rounds out the romance begun in A Russian Bear by delving into the reasons why Mischa is the way he is. Those who liked the novel should welcome this new chapter in the series."
Brief Encounters